My now ex-husband left the marital home three years ago, on Valentine’s day-anything for a bit of extra drama!  So it has always been a bit of a strange day for me, a celebration of finally becoming free, but a reaffirmation I was once again single!  Last year was the first Valentine’s day since the eventful departure/extraction of the ex where I actually felt able to date.  I had been chatting to a man online for a few weeks and when he asked me out on a date, nicely coinciding with the 14th February, I was very happy to accept.  I thought ‘Wow, this timing is perfect, it is surely meant to be!’  He seemed nice, always had plenty to talk about and from his pictures he looked attractive. 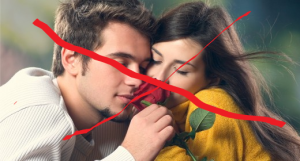 So, Imagine my disappointment when the guy who turned up looked distinctly older than he did on his photographs.  He was also much shorter than his 6 foot 1 inches he had entered on his profile.  So glad I had decided not to wear heels that day.  I attempted to hide my disappointment and decided not to write him off just yet.  We had connected when chatting on line….kind off, and he seemed pleasant enough. He suggested we go for a drink before our meal.  As soon as we entered the bar we got our drinks and we went to sit down.  He led me over to a table and he sat in the single chair leaving me to sit on a bench type chair in the corner, not very polite may I say, and in addition, I do not like being shoved in a corner.  As soon as I sat down he then got up and sat next to me on the bench style chair.  As there was also a table in front of me I now felt rather uncomfortable-in fact worse than that, TRAPPED.  To break the ice and try to alleviate the awkwardness of the situation, I began began chatting about the messages we had sent and the conversations we had covered in those messages.  As hard as I tried, after twenty minutes or so the conversation began to run dry, I was really struggling to find anything to say to this man.  This is unusual for me as I can quite often fill any awkward silences with ease but this time I just could not think of any words.  It confirmed things when he returned from a trip to the toiler and exclaimed:

“Oh well you’ve not done a runner so that’s a bonus!”

By this point I was desperately trying to think of a viable excuse as to why I could not go for the meal with him.  I began saying I needed to get home shortly as I had loads of things to sort out before work the next day.   He proceeded to show me pictures of his family days out, a final picture of his mum with hot chocolate round her mouth and stuck to her teeth were pretty much the final straw for me.  Was this fella just some crazy man?! As I was about to make my excuses and go I received a text message.  ‘YES!’ I thought. ‘A get out clause, I can just tell him that there is some emergency and I really need to go.’  But no one could prepare me for this.  I could not believe it, it was from my date-YES THE ONE SAT NEXT TO ME! I looked at him, puzzled, and he showed no emotion on his face at all so I assumed it was an old message which had come through late.  But as I clicked the message open I could not believe my eyes.  The message read:

I am dying to kiss you right now

I know we met online, but this man did realise that when you meet up in person you are supposed to be able to converse face to face right? That we are not still in cyberland…..did nt he? I looked at him again (more than likely with a look of horror on my face).  At this point I really could not think of anything I would rather not do. I did not fancy him at all, there was no connection, no spark and to be honest he actually was starting to freak me out!  I could not understand how he had read this situation so badly.  Surely the absence of my response and the look I gave him was enough for him to understand that this was no the way to approach a situation? APPARENTLY NOT!!!

Before I could do or say anything he lunged towards me, and I did only what I could have done in this desperate situation-I grabbed the scarf tied around my neck, and pulled it up over my face and said: 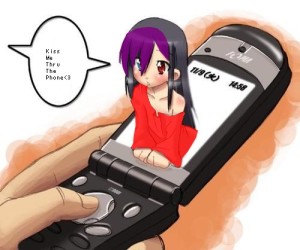 My date looked wounded, like a child who’d been told off for stealing biscuits out of the biscuit tin.  He replied “Really?”.  Erm, let me take a minute this think about this………YES, REALLY! I had been hemmed into a corner, subjected to his family album and epic tedious stories about people, of whom I had no idea who they were, pictures of chocolate teeth, and to top it off a text message whilst he was sat next to me. This was embarrassing enough, but then to have to create a diversion so as to not have to kiss him was more than my nerves could take.  I felt as though I was on the verge of a panic attack. Overall I think anyone would probably agree this was not a great first date!  We sat there in silence for what felt like a life time in itself(probably about three seconds) and all I could think about what what I could say so he would let me get away.

“So……erm…..I’ve lots to do before work tomorrow, I am sorry but I need to leave.”

I managed in a slightly nervous squeaky voice.  With this I shoved my way out of the corner and practically ran through the door.  This was the last time I saw this man and the last time I engaged in online dating.

I’m pretty sure Valentine’s day for me is jinxed.